Mini course on Language Learning like a PRO with Anki (Free for 14 days!)

Netflix is near and dear to many of us. From binge-watching TV shows, cozy nights in, movie marathons, and more, we’ve all found it to be useful for something.

But did you know that you can totally use Netflix for Language Learning? That it’s actually one of the best platforms out there for finding popular media translated into multiple languages?

And no, I’m not just talking about Spanish or French. Netflix actually has audio options in 26 languages, including Mandarin, Cantonese, Korean, German, and Thai. And Japanese, of course.

So while a pretty hefty plethora of quality Japanese films already exist, now you can also watch western-produced films in the popular language. For the most part, the titles I’ll be listing are pretty popular and ones I at least hope that you’ll like.

These shows and films are not originally produced in Japanese, and won’t reflect any Japanese culture…. so if that’s your goal, I suggest you use another platform.

Now, on to the list of the top 20 Netflix TV shows and movies available in Japanese! 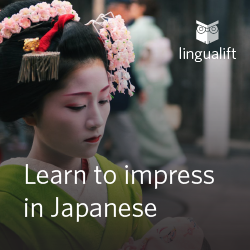 Now on to the movies!

Before you’re off on your cinematic journey

If you liked this article, then you’ll love this Master guide to Amazon Prime Video for Language Learning.

Since you’re here, I’m assuming that you’re learning Japanese, and if that’s the case then have I got a gift for you!

With Lingualift, you’ll be able to learn a language without memorization, frustration, or boring lectures. You’ll have access to:

Before you head off on your language journey– I want us to stay in contact with one another. Us language learners have to stick together right?

My language craziness expands to multiple platforms so you can also find me cranking out polyglot inspiration on Instagram and Pinterest. Don’t hesitate to direct message me or comment on one of my posts! I’d love to get to know you beyond this blog.

Aside from that fun, if you’re still here then I want to make sure you don’t miss out on your free language learning toolkit.

All exclusive content curated specifically for atypical language learners looking to make the language acquisition process as fun and unconventional as possible.

Equipped with a 4-week checklist, 100 fun learning ideas, the keys to a “naturally simple” approach, a rapid acquisition 2-week plan, and science-based guides to creating a language journal you love. All straight to your inbox. And trust me– I never spam.

Keep learning languages my friend! And I look forward to seeing you again real soon.

I’ve made it my mission with this blog to simplify life for minority businesswomen and culturally conscious individuals. Obstructing misconceptions, busting myths, encouraging intercultural communication, and living the definition of what it means to be “woke,” is my general mantra on this site. I’m a big advocate for putting time to good use; even when scrolling through Instagram, Pinterest, YouTube, or Etsy. I always encourage likeminded sisters to look for ways to personalize their work and boss up their lifestyle.